As new neighbours, we were naturally excited to join in the fun when we knew that the place we’re staying, is organising a Kampong Carnival.

Kampong means a village or a small enclosure of closely knitted neighbours.  Back when Singapore was a fishing village, the people would be living in these small kampongs, and there will be lots of laughter coupled with activities and simple handmade games.  So kudos to the management and volunteers for helping out in making this a big big success.

They had great activities such as face paintings…..

Natasha and her cousin Lizzie with both unicorn face paintings.

Next up was the performance from Savannah’s very own Zumbabes.  They were full of action and vigour and did their moves to perfection. 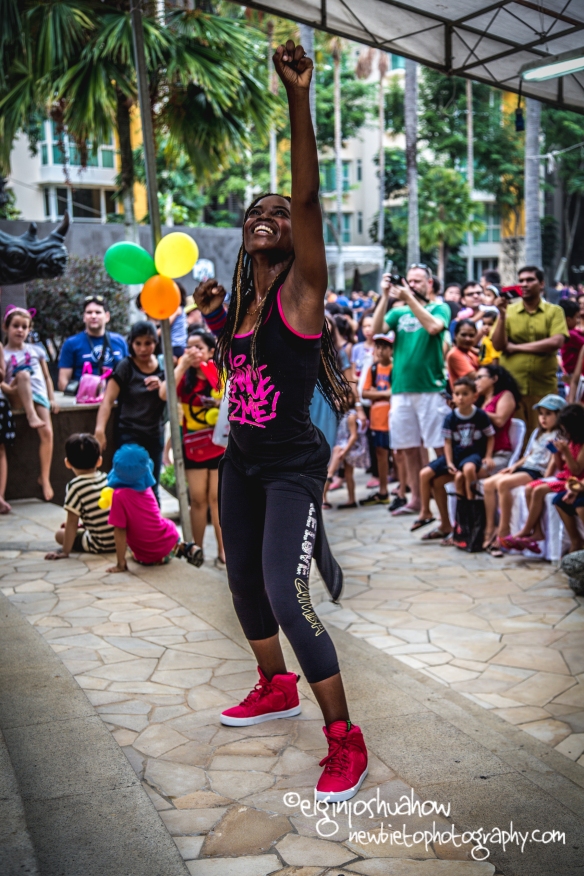 The instructor Gwen was awesome.  Here’s a great shot of her reaching the stars.

A fellow neighbour capturing the moments and ensure it stays with him in eternity.

The support from the family and friends were overwhelming, as you can see for yourself.

Mummy really put in tremendous effort in practicing for 2 weeks, to ensure she got her steps right too.  Here she is, enjoying herself thoroughly. 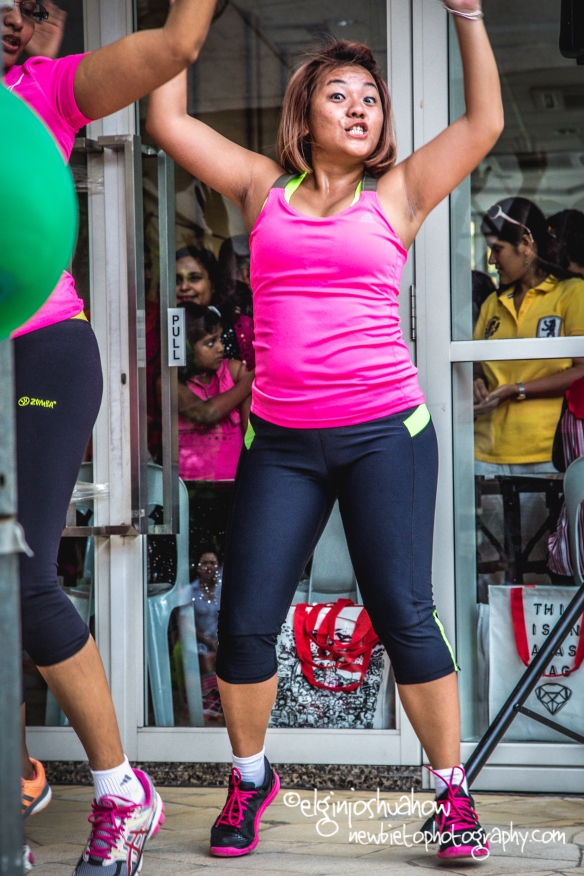 After the performance, it was the kids turn to have their fun.  There lots of games, as well as activities to keep them occupied.

Natty trying out ‘hockolf’.  hehe.  if there was such a word.  Golf with a hockey stick.  She managed to get herself a hole in one. 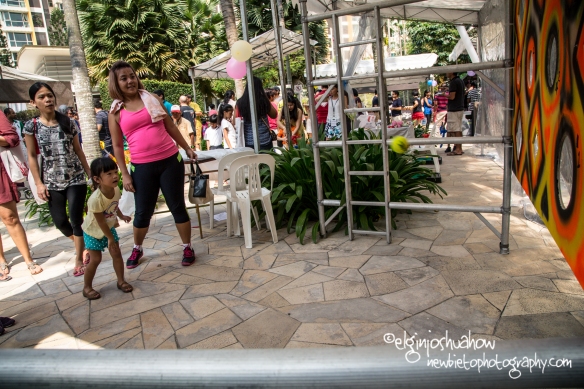 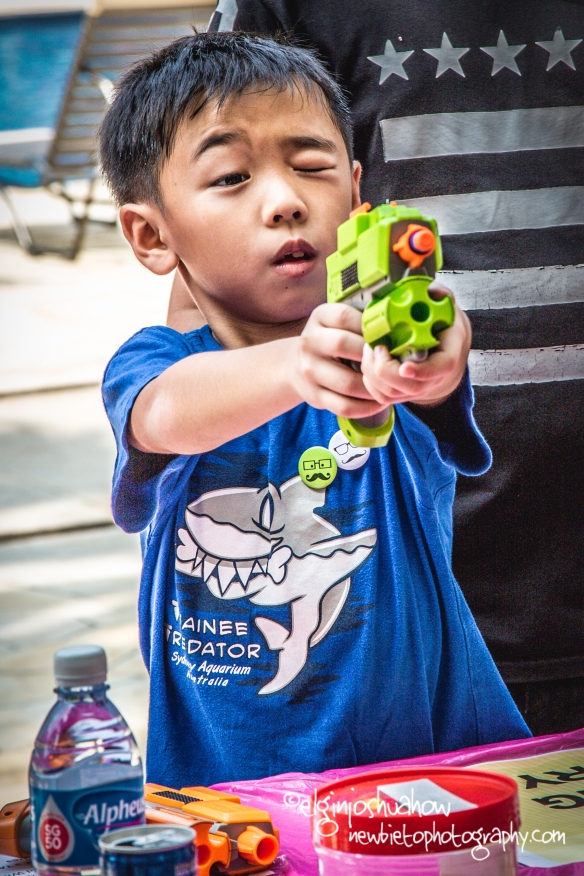 The games were well organised.  From ‘hamtam bolah’ where you used a ball and trying to score points by throwing them into holes scoring points, to ‘hole-in-soccer’, to innovative ‘nerf-gun-hit-the-ducks-down’ game, the kids really were enjoying themselves.

The pinnacle was the ‘one-v-one’ battle, where each kid had to balance on a air platform, and try to knock down the opponent kid.

Ok, so Kyeron had to go against a girl….  unfortunately….  but he still had to do what he needs to do….

I’ve always thought him to be focus and go for the win, even in games.  It’s true that games should be fun, but in every game, we should strive to win, and if we don’t, then accept the loss graciously.  In this way, it moulds them to be competitive yet allows them to accept defeat and try again.

Kyeron managed to fend off 3 challengers before losing, so it was a great effort from him.  Next up was Natasha, and she was very excited.

Unfortunately, it wasn’t really a fair fight..  haha….  credit to the boy, he didn’t retaliate one bit.

The final event was the lucky draw.  The crowd gathered, and all were yearning for the prizes.  They ranged from Microwave ovens, to Flat screen TV and bicycles.

A 6 shot panaroma image stitched into one to capture the size of the crowd waiting in anticipating, hoping their number be called by the MC.

Stuff made of dreams.  The 1st prize was won by one of the cleaners of the condo.  Awesome stuff.  The sheer joy from him, and everyone else sharing the joy with him was a great experience.

My final parting shot.  a 12 image panaroma stitched into one.  Wanted to show the crowd, stalls, and also the beauty of our home, all in one image.

Hope the management will do it every year from now on.

Amazing Island, filled with crystal clear waters, fishes frolicking around, and ultimately, gorgeous weather, we had a great time in Rawa Island. Seeing the kids happy faces, is amazing. Had a great time.  Amazing. I did a coffee book about it with … Continue reading →

Had the chance to explore using my Nokia Lumia 920 underwater with a waterproof pouch. Very surprised at how clear the photos turned out. Next up, underwater with my dslr. Hope you like it.

Had the chance to try out a special meal known as the Rickshaw noodles or La Che Mian (Mandarin) or Kan Chia Mee (Hokkien) means the “pull-vehicle-noodles. These set of dishes originated for the Rickshaw pullers in the 1940s. Because … Continue reading →

So Cara finally turned 1.  Had her party at Steph dad’s house.  Armed with my Zorki 4, and my 5DM3 (Just incase the film was bad 🙂 ). Here are some from my Zorki 4. Before her big day. Mummy … Continue reading →

Here are some ‘fun’ shots using the Portra 400 with my kids.  Was taken at home at night under a mixture of white and yellow light.  Settings on my Zorki 4 was f2, 1/250. Also brought my Zorki 4 to … Continue reading →

Manage to catch these 2 candid shots with my Zorki 4.  Taken with the Kodak Tri X 400.

I love B&W shots as the details in the shadow is really awesome, especially when the subjects are my kids.. Here’s some shot with Kodak 400 Tri X and my trusted Zorki 4.

So it was a holiday, hence we decided to take the kids out for some sunshine by the beach.  Called the Sims (Our very best friends) and Cara’s Godpa, and away we went. Was a great sunny day.  Wanted to … Continue reading →

It’s been a while since I last posted here.  Been really busy with work, and balancing time for the family.  Hence, I’m still unable to find time to shoot street. So here are some more Black & White photos of … Continue reading →